Runnable vs Callable – Find out the differences

Learn what is a runnable , what is a callable and the difference between the two, runnable vs callable. And how to execute them with code examples. 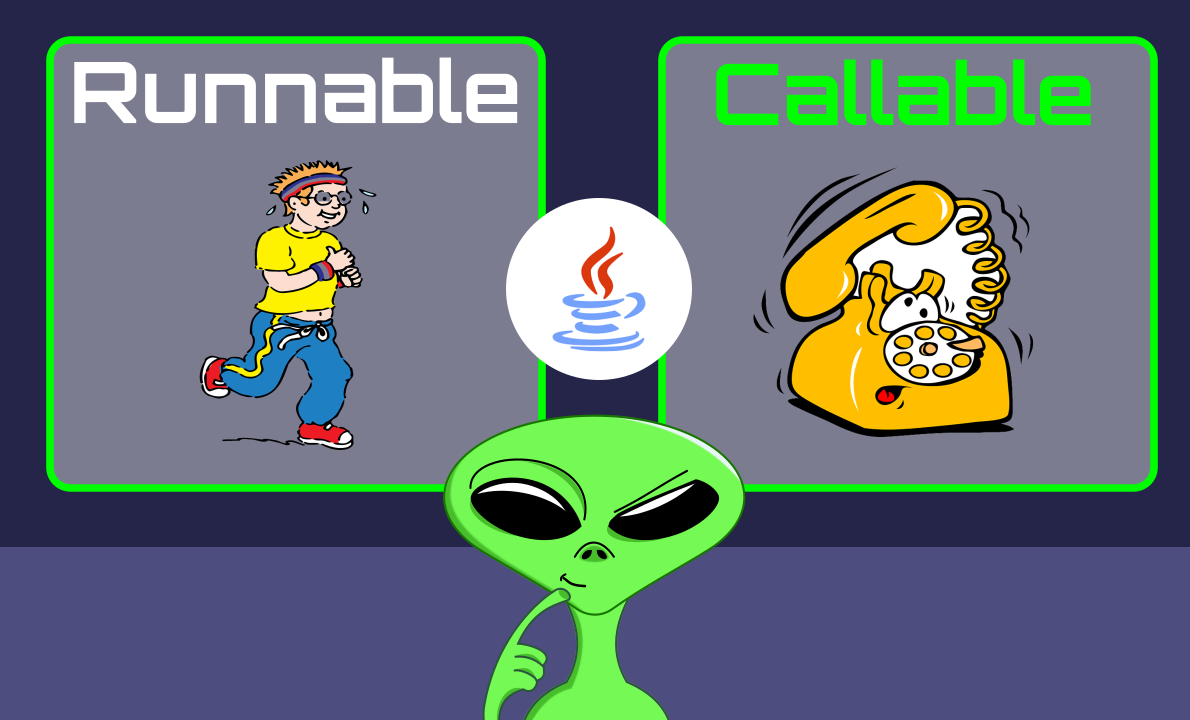 In this article you will learn what is a runnable , what is a callable and the difference between the two in java, runnable vs callable. These concepts are important when you are dealing with concurrency.

Concurrency basically means there is not just one execution thread in your program, but several executions or threads, potentially happening simultaneously. Therefore different pieces of the code might be executed at the same time.

To illustrate the runnable and callable concepts I have included several examples throughout the article. Let’s get started!

The Runnable interface in java enables you to define a block of code that can be executed within its own thread. Therefore if you create several runnable classes and execute them, and you will have several threads running at the same time within the same process or program. This is known as concurrency.

See the runnable interface below:

You can think of runnable as a wrapper class that allow you to define a piece of code that can be executed in isolation. Consequently this task could run in parallel with other tasks.

For example, let’s say you are cooking a rice recipe and you need to chop vegetables and boil rice. You can do these two tasks one after the other one. However if you can do both at the same time, in parallel, you will finish much faster. That’s what runnable allow you to do in java. Define code as isolated task and execute them in parallel. Also runnable allow you to run tasks in the background, to avoid blocking the main execution thread.

To illustrate how the runnable interface works, see the below examples:

The code above is quite simple. This runnable class will print Task started to the console. Then wait for one second. And last it will print the name of the thread that has executed the task.

Next is callable. Callable is also a java interface and as Runnable, you can use it to run tasks in parallel. However there is a key difference. The callable can return the result of the task or throw an exception.

To illustrate how to use Callable, let’s see an example.

The code above is basically doing the same as the previous example: printing Task started, waiting for 1 second and lastly printing the thread name. But there is one key different, when you implement the class you have to specify the type of the returning variable. In this example the Callable will return a string, however it could return any type you want, included a class you defined.

Let’s see another example of the Callable interface. In this example, I will modify the class WorkCallable so instead of waiting 1000 ms, It will wait for any number of milliseconds that I pass in. To do so, I will add a variable field and a constructor to the WorkCallable class.

This demonstrates a way of passing input values to the Callable task. This same method can be applied for Runnable as well. This can be useful if you want to define an isolated or independent task that needs depends on some input values. You could see those values as parameter to the Runnable.

Runnable vs Callable – The difference

The main difference between Runnable and Callable is that Callable will return the result of executing the task to the caller. If you use Runnable you can’t return anything, any result will need to be saved in separated shared structure or database. To understand this difference runnable vs callable, you can compare the two interfaces.

How to execute a runnable

You know to create a Runnable class. You just need to create a class that implement the Runnable interface. And then fill up the run method with the code snippet that you want to run in a different thread. This will define our task. Now let’s see how to execute the runnable. There are a few ways, using our previous example.

First way is creating an instance of the Runnable class and then call the run method. This will run the code in the main application thread.

As you can see in the code above, the Runnable will finish executing and the next line System.out.print("End"); will be executed. Both statements are executed sequentially because they are executed by one single thread. In this case, the main thread will be blocked and the program is not using concurrency.

Let’s see how to execute the Runnable class in a separated thread.

As you can see the thread name is different now. This means the program has created a different execution thread to execute the code contained in the WorkRunnable class. The main thread will trigger the runnable and then continue with the execution. That’s why the text end is printed before the runnable finished its execution.

How to execute a callable

Just like a Runnable, you can execute a Callable in a few different ways.

You can run the Callable in a separate thread. This way won’t block the main thread. However the way to execute a Callable in a separated thread is slightly different than the Runnable way. In this case you will create a thread pool. This thread will be idle until you submit a task to the pool. As soon as you submit the task, the pool will find a thread idle and it will execute the task. See this in action below:

To summarise, in this article we have covered how Runnable and Callable interfaces in java enable you to define code snippet that you can execute in different threads. This allow you to take advantage of the concurrency framework that java provides. Additionally we have seen the different between a Callable and a Runnable, runnable vs callable, and how to execute each of them.

I hope you enjoy the article and thank you so much for reading and supporting this blog! 🙂

What is the use of return in python programming?

DFS in Python – How to Implement it – Ultimate Guide