What is a mutator method in Java?

Learn what is a mutator method in java and the benefits of using mutators and accessor methods. All explanations include examples to illustrate. 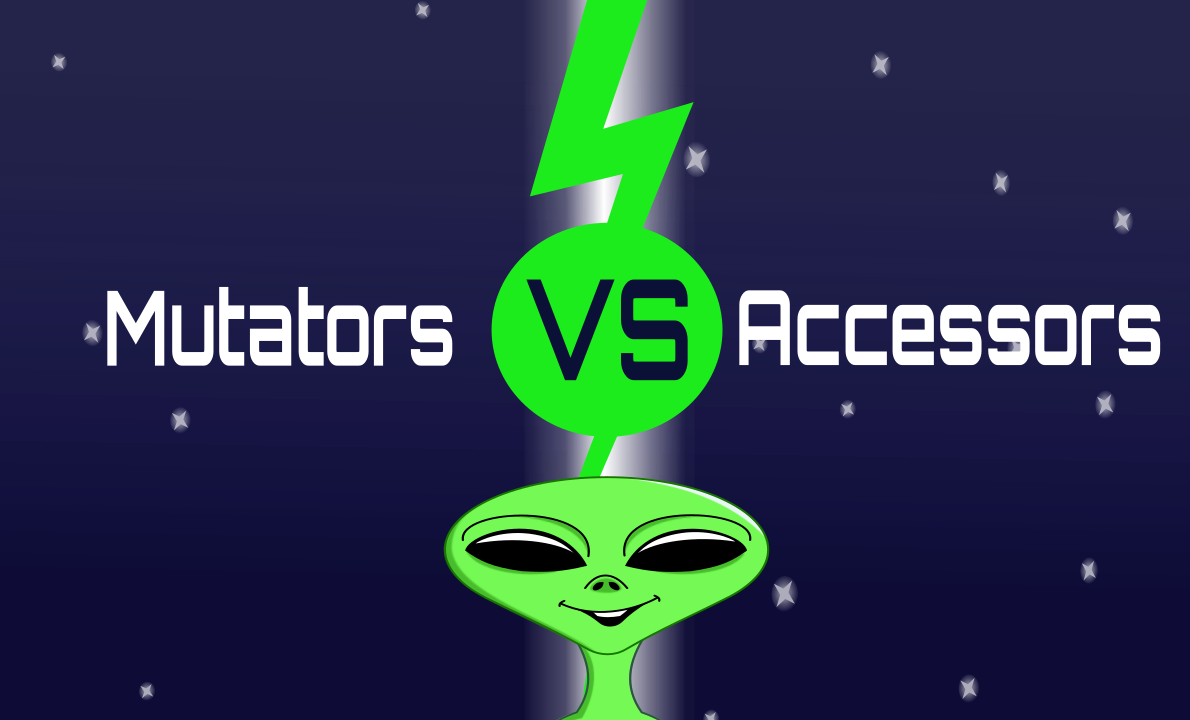 Object Oriented Programming means that you solve problems representing the entities of the problem as classes. A class has a state and methods where the state is a set of variables containing the relevant data in our representation. And the methods determine the operations our class can perform.

For example, we can define the class Circle:

This class is representing the circle concept. The circle class state has the radius and a method named area(), which returns the circle area.

You can add the following code to the Circle class to test it out:

We have defined a class using object-oriented programming and created the object circle1 of the class Circle. What if I wanted to modify the radius of the object circle1. As the code stands, I can’t change it since there no method to access the radius variable. All I can do is creating a new Circle object with a different radius. What can I do to correct this?

You can do two things; one will lead to a well-designed class, and the other to a poor, challenging to maintain design. One option is declaring the radius field as a public field, so it is accessible outside the class. See the changes below:

The other option is creating methods to access and modify the radius field, which allows you to hide the implementation details. This mechanism is also known as encapsulation.

For example, in the previous code snippet, the setRadius() method is a mutator method. You could modify this method to add some data validation. For instance, an example of data validation could be checking if the new radius is a negative number.

Let’s see some examples to illustrate the mutator and accessor methods. Setters and getters is another way of referring to accessor and mutator methods.

Below there is an example of how to add getters to a class. The class is called Product, and it has two getters: getPrice() and getName(). These methods allow any client code to access the class variable, which is price and name.

And now, I will add the mutators, so I can access and modify the class variable.

As you can see above, the setter methods setPrice() and setName() also include validation, making sure the data passed meet some criteria. For example, one of the requirements is that a price should always be above zero. In case the parameter is not valid, the code will throw an exception. Otherwise, it will assign the new value.

In java, the names of these methods, accessors, and mutators should follow specific naming conventions. These rules are entirely stabilized, which makes them essential to follow. Not following these conventions can create frustration and confusion when other people are reading your code.

Let’s start with the naming conventions for mutators. The method should be declared as public and return void. Moreover, the method name should begin with the word set in lowercase. Followed by the class variable name with an initial capital letter. For instance, if our class has a variable called age, then the mutator method should look as follows:

Along with mutators, we have seen the accessors, which also follow a similar naming convention. The rules are that the method should be declared as public. Additionally, the method name should start by get, followed by the class variable name with an initial capital letter. The method has no parameters and returns the instance variable type. Following the previous example, let’s create an accessor method for the age variable:

Benefits of Mutators and Accessors

So far, we have seen the accessor and mutator methods in java with some examples. And familiarize ourselves with the naming conventions that you should follow when declaring these methods. However, how are these methods useful? The main benefit is encapsulation. This basically means that by creating these methods, you are hiding the internal details of your class from other components. Other components can only communicate via the API.

Consequently, classes are decoupled; they don’t depend on each, allowing you to develop in isolation, which leads to faster developments since team members can create different classes and components in parallel. Besides easing maintenance, since components can be modified, with a small impact on other dependant components.

To summarise, in this article, we have seen that mutator methods and accessors methods in java are methods that enable us to read and write class variables. Their primary purpose is helping us to design classes that are well encapsulated and decoupled from each other.

I hope you find the article useful, and thank you so much for reading and supporting this blog! Happy coding!

Python Errors: Nameerror name is not defined and more

What is the use of return in python programming?